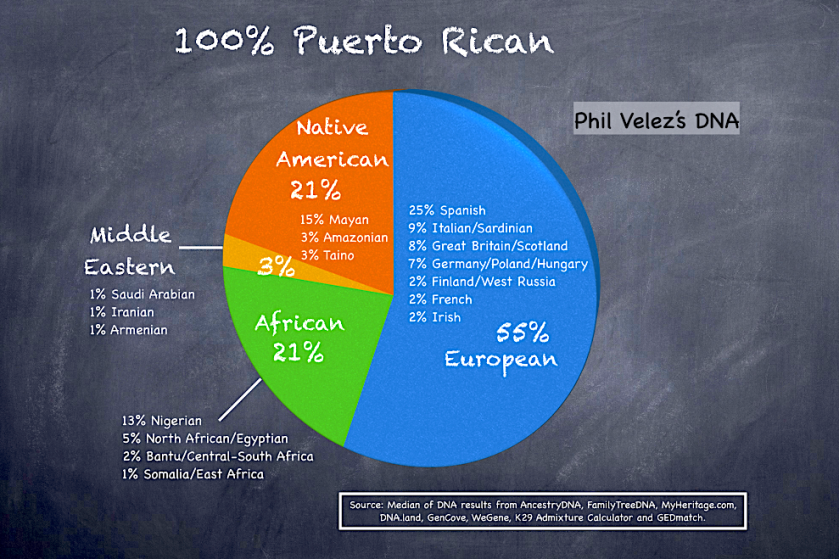 This month, after thinking about the possibilities for years, I received my DNA ancestry results from Ancestry.com. It was a much desired Christmas gift that cost about $80 and a month of excitement and anxiety. I began 2018 finally learning about my ancestral heritage, but after the climactic reveal, I was left wanting to know much more. This quest for specific genetic information of myself led me to multiple questions that eventually left some doubt in my initial DNA findings.  I now, however, have made sense of the numbers and am confident in stating I am 55 percent European, 21 percent African, 21 percent Native American, and three percent Middle Eastern.

I was informed something to that effect with my first results but with such a sensitive and important matter, I needed to find a reliable way to verify the complex information.  I wanted to see how accurate these initial numbers were, so I requested a second DNA analysis from another company. I noticed a significant difference in the ethnicity results. I then submitted my raw data file – which can be downloaded after your results are completed – to a third company to find yet another surprisingly slight variation. I decided that I would cross-reference as many results as possible to confidently determine the breakdown of my own ethnicity.

I took my raw DNA data file and provided it to three free online sites/tools for their analysis, paid $20 to have my DNA analyzed by one company, bought an online app for $5 for another analysis and requested a free review from another company. In total, I was able to compare eight different sets of my DNA results. I entered the data in a color-coded multi-tabbed spreadsheet and averaged out related results to create one trustworthy master set of scientifically sound data that I could fully own and faithfully believe and pronounce.

For this research, I compared my DNA analysis data from the following companies: Ancestry.com, FamilyTreeDNA, My Heritage, DNA.land, GenCove, WeGene, GenePlaza.com, and GEDmatch.com.

After several hours of crunching numbers and analyzing patterns I have determined, with overlapping evidence, that I am 25 percent Spanish (numbers were in the 22-30 percent range but averaged out at 25.) I learned that my Africanness mainly originates from Nigeria/West Africa, my Taino indigenous blood can be traced to the Mayan and Amazonian people of South America, and I was surprised to find out that I am about three percent Ashkenazi European Jewish.

DNA ancestral testing is very popular right now and as the cost of tests become more affordable, DNA testing will become even more widely accessible.  I think everyone should have his/her DNA tested. I now have a broader world perspective of who I am and where my ancestors came from. I look forward to learning more about my diverse historical ethnic background and making meaningful connections with my ancestors.

Back in 2012, I purchased the first generation version of Amazon’s Kindle Fire. It worked for me for years, until it was destroyed in a car accident this past summer.  I generally use a tablet to read books, briefly catch up on current events, and check social media. After not having a tablet for a few months, I realized I missed having one so I once again went shopping for a new tablet.

Again, I chose the inexpensive and reliable Fire tablet from Amazon. It is lightweight, sturdy, and functional for my needs. The battery life is incredible and it has a microSD slot for additional storage. It’s a great cheap tablet that performs well and I would recommend it to anyone who is looking for a tablet and does not want to pay several hundred dollars for an iPad.

However, there is a bit of bad news. The camera is terrible. The quality is so bad that I wonder why it was added to begin with. Another big problem is that Amazon does not make it clear that the Fire tablet comes with ads. The lock screen continuously flashes annoying Amazon advertisements. To remove the ads you have to pay Amazon an additional $15. Amazon should just add this fee to the initial price of the tablet.

Aside from the camera and unwanted ads, I am very happy thus far with my new tablet. I think you will be as well.

Like Loading...
The New York Latino Film Festival (NYLFF),  the premier urban Latino film event in the country since 1999, kicks off in NYC on Wednesday, October 11 and runs through Saturday, October 14, 2017. The NYLFF produces culturally relevant and entertaining experiences that build audiences for Latino cinema, support the film community with professional development, and foster relationships for Latino talent.

The 14th NYLFF is presented by HBO and will feature such films as Saturday Church, a “La-La Land” meets “Moonlight” coming out story, and A Change of Heart, starring Jim Belushi and a Puerto Rican drag queen.

“Our event is about galvanizing and empowering community. We are very excited to bring back the festival with such an exciting lineup showcasing some of the best multicultural, bilingual, and diverse films,” said Calixto Chinchilla, festival founder.

The NYLFF makes its much-anticipated return to the Big Apple and will once again highlight a diverse slate, spanning all genres and formats. Notable stars and filmmakers include Emilio and Gloria Estefan, William Levy, Residente, and Luis Guzmán.

Other films being showcased at the NYLFF include: HOLD ON, the story of a talented mixed race singer who must fight to keep her personal dreams and family life alive while working at a small Los Angeles church; El Pantera, a documentary film chronicling the rise of Mexican UFC fighter Yair Rodriguez; and Vito C: La Vida Del Filósofo, the rise to stardom story of Reggaeton’s founding father, Vico C.

In January 2017, I accepted a temporary contract position as a marketing communications manager at LaGuardia Community College in Long Island City, NY. LaGuardia is part of the City University of New York and is based in one of the most ethnically diverse communities in the world, the borough of Queens.

As a marketing communications manager within the academic affairs division, I assist with promoting programs and events to the student population via email, online student portal, and social media platforms. There is a great deal happening at LaGuardia. The community college offers over 60 degrees and is abundant with resources which help students reach their academic goals.

LaGuardia is a unique institution of higher learning where – through a varied offering of academic and vocational programs – students from all over the world are guided toward building a better life for themselves and their families.

LaGuardia is well known for several academic degrees, notably Nursing, Paramedic, Commercial Photography, and New Media Technology. The college had over 45,000 students enrolled in both degree and non-degree programs in the fall of 2015.

My experience at LaGuardia has been incredible. The teamwork between administrative staff and faculty meshes extremely well and a majority of  students are dedicated, talented individuals working to achieve greatness. I definitely recommend the school to anyone who dares to do more with their lives.

A chic new tapas bar has opened up in the East Midtown section of Manhattan. Kiss My French debuted in August on East 53rd Street near Second Avenue and its ambiance, service, and delightful tasty tapas are well worth a trip.

A fraternity brother of mine, who invested in the joint venture, invited me to the soft opening of Kiss My French. I had heard about my brother’s dream of opening up a bar/restaurant for quite some time, but I did not know what to expect. To be honest, I was pretty impressed with the place. The decor was on point, the hospitality was superb, the drinks were refreshing, and the food was excellent.

When you walk into Kiss My French, you immediately know you’re in someplace special. The lighting is welcoming and the music is soothing.  TVs entertain patrons near a bar top that was created from the floor of an old bowling alley. A spacious and comfortable lounge near the back of the bar compliments the new establishment. Overall,  you can tell there was a great deal of thought put into every aspect of this tapas bar experience.

Customers are already raving about Kiss My French. One Yelp reviewer noted, “It’s a classy socializing environment where you can sit at the bar and watch a game after work or sit at one of the two lounge areas and conversate. Definitely recommend it.” [sic]

I agree. The next time you are thinking of a place to relax and unwind in the East Midtown section of Manhattan, or just have a good time with friends or by your awesome self, check out Kiss My French. My fraternity brother and his partners, which include French Chef Johan Giraud, would thank you for visiting. I thank you in advance.