Since the early 1990s, I have been conducting research on the Delphic Fraternity. It was a college literary society based in New York that eventually became a statewide fraternity. The fraternity almost became extinct in the late 1980s, until a small group of diverse male students at the New Paltz State College decided to form a multicultural fraternity.

In their initial fraternity fact-finding mission, the future members of the New Paltz fraternity came across many historical references to the Delphic Fraternity, which was the first and oldest fraternity at New Paltz. It was last active in 1972 and in 1986 some alumni still lived in the surrounding areas. The fraternity interest group contacted local alumni and in 1987, after a great deal of hard work and determination, the New Paltz student group was initiated into the legendary Delphic Brotherhood.

I joined Delphic of Gamma Sigma Tau Fraternity during my junior year at SUNY New Paltz. I had been fascinated by fraternities and sororities since freshman year. I could see myself in a few of them, but not one stood out for me enough to make the commitment to join.  Back in the late 1980s, fraternities at New Paltz were either predominantly White or Black organizations.

I did not want to be a part of a specific ethnic fraternity and that included any that were all Latino as well. This group of future Delphics was a multicultural bunch of guys, which I found very interesting mainly for the opportunity to learn about different cultures. Then I noticed the word “Delphic” on some fellow students’ t-shirts and I inquired about what it signified.

I was told the guys, some of which I had known and had already developed friendships with, were working to re-establish the oldest local fraternity at New Paltz. They were also looking to form the first official multicultural fraternity on campus. The combined possibilities piqued my interest. I attended a general interest meeting and as they say, the rest is fraternity history.

I have been active as the fraternity’s self-proclaimed historian for more than 25 years. We have another historian from the 1960s named Rich, but he’s not on the Internet much. Rich manages the actual artifacts of the Delphic Fraternity. I tirelessly work as the organization’s social media manager and assist with the online promotion of the fraternity far and wide. It’s also great to see younger Delphic Brothers interested in and owning our rich fraternity history.

When I graduated from college, I had some time to delve a bit more into the history of the fraternity. Throughout the years and in between jobs, I continued to put the fraternal pieces together. The archives at SUNY New Paltz noted the organization as one of several in the state. I then reached out to other SUNY libraries to begin connecting the Delphic dots.

The Zeta chapter at New Paltz operated as a purely local fraternity at the time. Alumni from the 1960s told me they knew there were other chapters of Delphic and/or Sig Tau in the state, but they did not really know where exactly. Oneonta kept coming up as another location.

Research shows the fraternity was founded as a college literary society, which was a local student organization. However, historical notes stated the genesis of the literary society at Geneseo stemmed from elsewhere. Fraternity history notes of prior literary societal connections yet did not outright mention any names of actual associations or the specific locations of these other societies.

Though the Delphic Society was founded in 1871 at the Geneseo State Normal School (today SUNY Geneseo,) the college literary society later became known as the Delphic Fraternity once it began affiliating with other literary societies in the state of New York and Pennsylvania.

In the 1950s, the Delphic Fraternity at the College at New Paltz (today SUNY New Paltz) briefly became a member of the national organization of Sigma Tau Gamma. In 1962, the New Paltz chapter of Delphic became an incorporated membership entity in the State of New York. In 1987, the New Paltz chapter was re-established as Delphic of Gamma Sigma Tau Fraternity, the first official multicultural fraternity formed on the east coast of the USA.

The Delphic Fraternity has gone through various formations since its founding in 1871, however recent findings can connect the creation of the fraternity to college literary societies elsewhere in New York.

Milne attended the University of Rochester as an undergraduate and participated in the last public debates sponsored by the Delphic Society in 1866. Milne later became a professor at the Brockport Normal School then principal of the Geneseo Normal School in 1871.

Principal Milne was instrumental in the founding of the Delphic Society at Geneseo. Milne wanted to provide students at Geneseo with a college literary societal experience similar to the one he enjoyed while at Rochester. He assisted the 13 Delphic Founders at Geneseo in forming their society and most likely helped name it based on the society at Rochester, which was only 30 miles away.

The societies at the University of Rochester ceased to exist around the late 1860s when the fraternities at Rochester became more prominent and the national affiliation of these organizations outweighed the advantages of local college literary societies.

The Adelphian Society was founded by 31 young men and existed on the Colgate campus in name until 1880 when the society became a chapter of the national Beta Theta Pi Fraternity.

Going back a bit further into the university archives at Colgate, we find that the Adelphian Society originated as another society known as Gamma Phi, the first college literary society to be founded at Colgate University.

Administrators at Colgate stepped in to help resolve membership conflicts between the Gamma Phi and Pi Delta Societies, the two literary societies at the time.  Competition for membership became so fierce that administrators decided to merge the two societies into two new student organizations: the Adelphian and Aeonian Societies.

The last update to the Delphic Fraternity History e-Book only mentioned the fraternity’s historic ties to the Delphic Society at Rochester. The next update, scheduled for the summer of 2021, will note the organization’s historic connection to the Gamma Phi and Adelphian Societies at Colgate University.

Some may say all these historic affiliations are confusing, and that we as the Delphic Fraternity should just focus on the present organization’s 1871 founding in Geneseo, NY. However, history is what it was. I believe it is vital to truly know one’s organization for we can only fully move forward by acknowledging and learning from our complete past.

It is important to highlight the seminal concept of the fraternity, which after years of research stems from the initial formation of the Gamma Phi Society at Colgate University, sometime around 1833.

All of this history illustrates the fraternal Delphic DNA can be traced back to 1833 via college literary societies even though the actual fraternity as we know it today was founded in 1871. 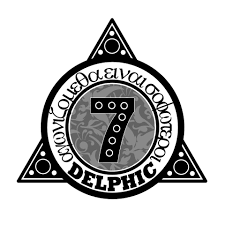 Who knows what else can be uncovered before the next update? I am open to suggestions from other fraternity/sorority historians (and those just interested) on how to layout all this new fraternity history.

Feel free to contact me with any feedback you think may be helpful. Since I am mentioning other organizations in this blog post, please also free feel to message me with any historical corrections or clarifications.